When U.S. unemployment is at a 50-year low, why do so many people have trouble finding work with decent pay and adequate predictable hours? A new economic indicator—the US Private Sector Job Quality Index (JQI)—gives the answer: we have lots of jobs, but they are increasingly low-quality jobs 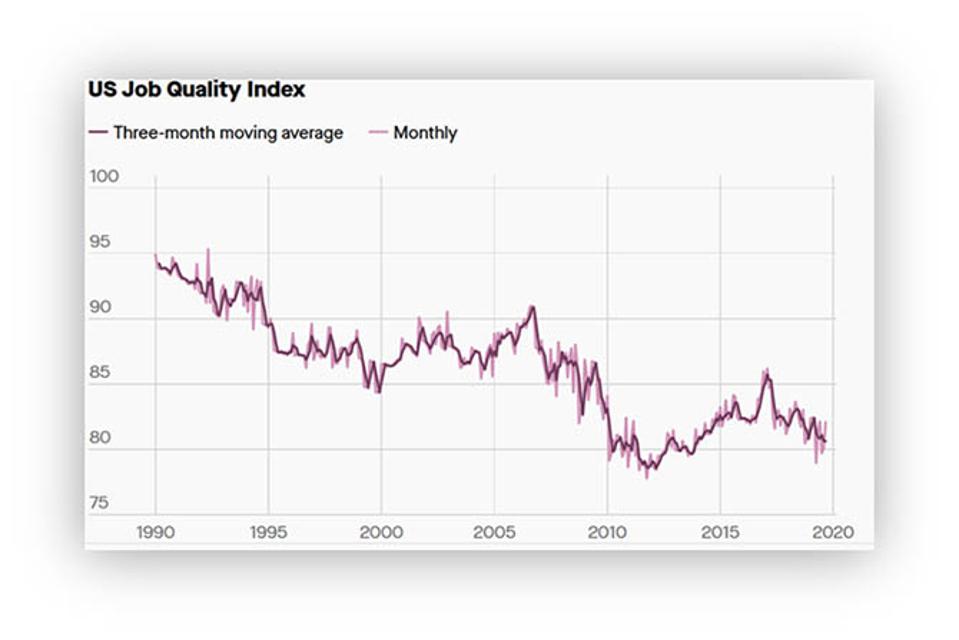 Executive summary:
Splashy, big name personalies like Jack Welsh and Jeffrey Immelt neglected the core competencies and instead jacked the company up on “low quality” financial investments that helped meet quarterly earnings goals.    After the 2008 crash, the game was exposed.  Now the company is hopefully going back to basics.

In the NY Times article, Don’t Blame the Work Force, Peter Cappelli, a professor of management at the Wharton School, has noted sharply different opinions between corporate executives, who typically say that schools are failing to give workers the skills they need, and the people who actually do the hiring, who say the real obstacles are traditional ones like lack of on-the-job experience. In addition, when there are many more applicants than jobs, employers tend to impose overexacting criteria and then wait for the perfect match. They also offer tightfisted pay packages. What employers describe as talent shortages are often failures to agree on salary.

If a business really needed workers, it would pay up. That is not happening, which calls into question the existence of a skills gap as well as the urgency on the part of employers to fill their openings. Research from the National Bureau of Economic Research found that “recruiting intensity” — that is, business efforts to fill job openings — has been low in this recovery. Employers may be posting openings, but they are not trying all that hard to fill them, say, by increasing job ads or offering better pay packages.

From The Washington Post Wonk Blog (by Brad Plummer):

The best way to think of Amtrak is that it’s essentially two different train systems rolled into one. One system is quite successful, the other isn’t.

First, there are Amtrak’s shorter passenger routes that run less than 400 miles and tend to connect major cities. Think of the Acela Express in the Northeast, or the Pacific Surfliner between San Diego and Los Angeles. These 26 routes carry four-fifths of Amtrak’s passengers, or 25.8 million riders per year. And they’re growing rapidly. Taken as a whole, these shorter routes are profitable to operate — mainly because the two big routes in the Northeast Corridor earn enough to cover losses elsewhere.

Then there are Amtrak’s 15 long-haul routes over 750 miles. Many of these were originally put in place to placate members of Congress all over the country, and they span dozens of states. This includes the California Zephyr route, which runs from Chicago to California and gets just 376,000 riders a year. All told, these routes lost $597.3 million in 2012.

Brookings has a neat interactive tool that lets you scrutinize each of Amtrak’s routes, looking at how many passengers they carry and how much money they make (or lose) each year.

From The Next Panic in the Atlantic Monthly:

Europe’s current financial crisis will be followed by a more devastating one, likely beginning in Japan. The Japanese government is using private savings to fund current spending, such as pensions and wage payments. With projected annual budget deficits between 7 and 10 percent of GDP, Japanese savers are essentially tendering their savings in return for newly issued government debt, which is not backed by hard assets. It is backed only by an aging, shrinking population of taxpayers.

The most worrisome implication of Japan’s increasingly precarious position, particularly in the wake of the 2008 crash and Europe’s ongoing crisis, is that our financial systems appear to be returning to their inherently unstable nature, which plagued the 19th and early 20th centuries. Financial institutions back then were not too big to fail—they were too big to save. Their balance sheets dwarfed most governments’ ability and willingness to provide support.

Through the development of central banks and active fiscal and monetary policy, the rich world has managed to avoid serious depression for seven decades. Yet big finance—which tends to grow ever larger when crises are rare and credit risks seem muted—hides deep political flaws, the costs of which compound over time. Relative to the size of the world economy, global debt markets overall are two to three times their size in 1970.

So it’s not really Wall Street and big banks which are the source of our econmic problems, it’s globalization.

“for most of American society, and certainly for the majority of Americans who don’t have a bachelor’s degree, globalization has meant facing much lower-wage workers abroad and increasingly powerful competitive pressures. So our society began to separate between the “haves” and the “have-nots,” really in the early 1980s.”

And paraphrasing: Ronald Reagan’s solution to the problem (less government), completely missed the point and, in fact, made things worse.

From the WhiteHouse.gov blog Where does our national debt come from :

If what this author is saying is true, how come no one is screaming about it on the daily news shows:

“Extend and Pretend”: The Severe Ramifications of Wall Street’s Game:

A systematic plan to create the illusion of stability and provide no-risk profits to the mega-Wall Street banks was implemented in early 2009 and continues today. The plan was developed by Ben Bernanke, Hank Paulson, Tim Geithner and the CEOs of the Wall Street banking syndicate. The plan has been enabled by the FASB, SEC, IRS, FDIC and politicians in Washington DC. This master plan has funneled hundreds of billions from taxpayers to the banks that created the greatest financial collapse in world history. The authorities had a choice.

Part two of the master cover-up plan has been the extending of commercial real estate loans and pretending that they will eventually be repaid. Billions in commercial loans are in distress right now because tenants are dropping like flies. Rather than writing down the loans, banks are extending the terms of the debt with more interest reserves included so they can continue to classify the loans as “performing.” The reality is that the values of the property behind these loans have fallen 43%. Banks are extending loans that they would never make now, because borrowers are already grossly upside-down.

Extending the length of a loan, changing the terms, and pretending that it will be repaid won’t generate real cash flow or keep the value of the property from declining. US banks hold an estimated $156 billion of souring commercial real-estate loans, according to research firm Trepp LLC. About two-thirds of commercial real-estate loans maturing at banks from now through 2015 are underwater

It should warm your heart to know that financial [institution] profits have amazingly reached their pre-crash highs. All it took was the Federal Reserve taking $1.3 trillion of bad loans off their books, overstating the value of their remaining loans by 40%, borrowing money from the Fed at 0%, relying on the Bernanke Put so their trading operations could gamble without fear of losses, and lastly, pretending their future losses will be lower and relieving their loan loss reserves. The banking industry didn’t need to do any of that stodgy old-school stuff like make loans to small businesses. Extending and pretending is much more profitable.

The NYTimes has a fantastic multiple choice style test/puzzle called Budget Puzzle: You Fix the Budget for showing people what realistic choices are required to balance the (government yearly) budget.

Most significantly, the web page shows the tremendous cost of entitlements and military spending, and conversely, the insignificance of other popular budget cutting ideas (like cutting the size of the government)